The future is closer than we think. With the proliferation of AR (Augmented Reality) technology, a number of companies are grabbing the torch and paving the way. There were already rumours that Apple was working on its own AR and VR wearables. Now, another company could be throwing its hat in the ring. Leakster WalkingCat shared two videos that could be Samsung’s attempt at AR. WalkingCat is a rather well-known leaker and has shared leaks of other Samsung products as well. Do take these videos with a grain of salt though, as Samsung has made no official announcement regarding the Samsung AR Glasses.

In the videos, we can see that the Samsung AR glasses would act as a sort of portable display. Dubbed the ‘Glasses Lite’, they do look a bit ‘thicc’ but with an AR system in it, we don’t expect it to be too compact. At least not now. The video shows a simulation of what wearing these glasses could feel like. It certainly does look very promising as it could be a game-changer in terms of entertainment and even with work. The concept video also shows how gaming could work on a system like AR. It certainly does look very immersive. It seems that Samsung is also working on integrating the Galaxy Watch as a control unit for the Samsung AR glasses. We also see how the glasses can switch from an AR display to a tinted ‘sunglasses mode’. 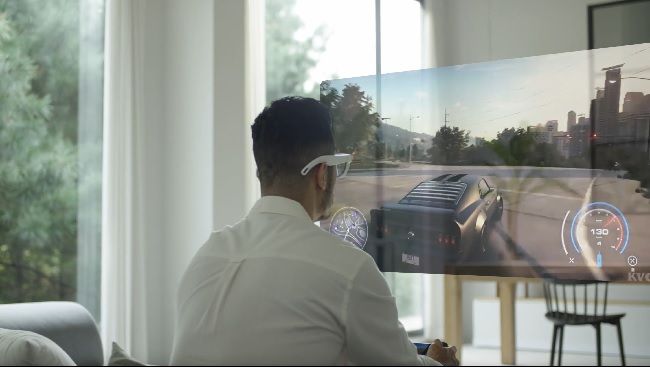 The second video expands on a few elements by showing off a projected, floating keyboard that users can type on. It also shows off a holographic display. Users could potentially chat with full-bodied holograms. We also see how users could zoom in and out, immersing themselves fully in a projected design. It truly does look incredible but again, these look like concept videos and are not the real thing.

Who knows what the finished product will look like but if its anything close to what was shown, we can be sure the future is going to be very cool. If you want to know more about AR, you should check out our basic guide, right here.