Samsung has been working hard on flushing-out its popular Galaxy A lineup with the recent announcement of the Galaxy A72, A52 and A32. The trio can be had in both a vanilla 4G variety, as well as trendy and reasonably-priced 5G variant. It seems that the Korean giant is now planning to introduce an even cheaper A device in the Galaxy A22. Again, in both a 4G and a 5G version. Last we heard of such a model was way back in December last year, until a certain SM-A225F was recently spotted on the Bureau of Indian Standards (BIS) website. 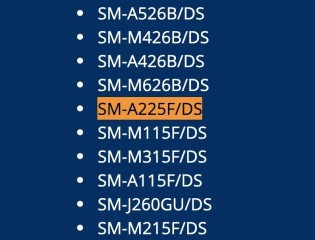 Unfortunately, beyond the SM-A225F/DS moniker, indicating that the phone will have dual-SIM support, there is hardly any other info available on the A22 4G. That same SM-A225F model number was also spotted in an HTML5 test listing, which does mention that it will run Android 11 out of the box.

We don’t really know a lot about the SM-A226B either, which is said to be the Galaxy A22 5G. Rumors have mentioned a quad-camera setup with a 48MP main snapper, 8MP untrawide and two additional 2MP modules for depth and macros. A 13MP selfie is also likely and apparently the Galaxy A22 5G is expected to have two RAM and storage variants and multiple colors, including gray, white, light green and purple. Pricing for the 5G Galaxy A22 is expected to be in the EUR 229 ballpark, naturally positioning it lower than the A32 5G. Hence, we could anticipate it to rock something like the MediaTek Dimensity 700 or 720 chipset, or perhaps Qualcomm’s Snapdragon 480 5G budget part.