Samsung’s Galaxy M-line has brought in several phones with ample battery capacities and it seems another one is on its way. A new listing on the DEKRA certification agency details an upcoming Samsung Galaxy phone believed to be the Galaxy M32. The listing shows a battery with a rated capacity of 5,830 mAh which should translate to a typical value of 6,000 mAh. 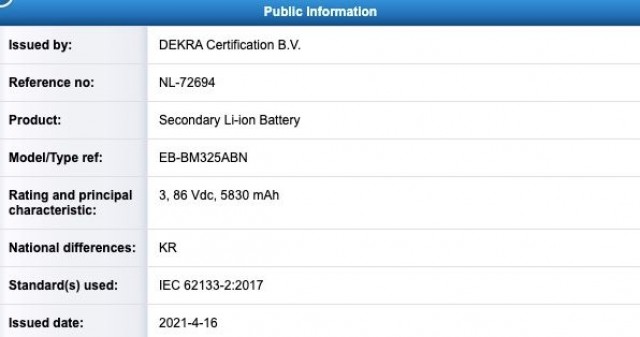 The battery bears the EB-BM325ABN model number which gives out its ties to the Galaxy M32. Not much else is known about the device though according to speculation, we’re in for a similarly spec’d phone to the Galaxy A32 boasting a 6.4-inch AMOLED display and 64MP primary camera. Being an M-series phone we can expect a different design and more affordable price tag.