Xiaomi has already launched a number of phones since the turn of the year, with the company launching devices across multiple budget segments in 2021. Adding further to the promise, the company has also confirmed that it is planning to launch the much-awaited Redmi Note 10 series in India. In fact, Xiaomi India head, Manu Kumar Jain himself teased the Redmi Note 10 series launched in early March.

However, a new Amazon listing has spilt more details about the launch. The leaked listing reveals that the Note 10 series will be launched on March 10 in India. First spotted by GizmoChina, the listing suggests that Xiaomi will launch the two phones – the Redmi Note 10 Pro and the standard Note 10 in 4G and 5G variants in India. So, as per the listing, Xiaomi will launch a total of four variants which will include the Redmi Note 10 5G, Note 10 4G, Note 10 Pro 5G, and a Note 10 Pro 4G.

Sadly, that’s all that the listing has revealed till now. However, there’s already a lot of information available about the two phones courtesy of previous leaks. These leaks have suggested that the Redmi Note 10 Pro will be launched in India in 6GB+64GB, 6GB+128GB, and 8GB+128GB RAM and storage variants, while the Redmi Note 10 will be available in 4GB+64GB and 6GB+64GB storage variants — with more variants for the latter also expected. 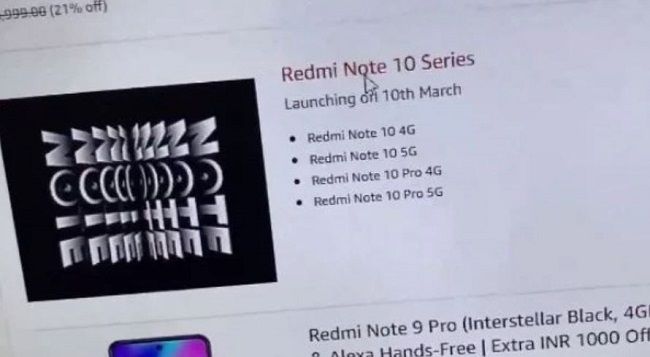 The two phones have also been seen on certification websites such as FCC, BIS, IMDA, and more. Of these the FCC listing for the Redmi Note 10 Pro has been the most exhaustive, with the listing suggesting that the Note 10 Pro will flaunt an IPS LCD display with a 120Hz refresh rate.

Underneath the display, the handset is tipped to be powered by the Snapdragon 732G SoC and run a copy of MIUI 12 based on Android 11. The phone is also reported to offer a massive 5,050mAh battery with fast charging support upon launch.