The Tesla CEO jumped on the non-expendable token bandwagon with a bizarre video featuring his new song about NFTs.

Opinions expressed by Entrepreneur contributors are their own.

By now, we should be used to Elon Musk’s eccentricities, but he always finds a way to surprise us. The CEO of Tesla joined the fever of non-fungible tokens or NFT, since he put up a tweet for sale. The tweet is a song he made about said crypto assets. The interesting thing is that, in less than 24 hours, he received offers for more than a million dollars.

It all started last Sunday around noon, when the mogul, who recently called himself ‘Tesla’s Technorey,’  announced on Twitter that he would sell “this song about NFTs as an NFT.”

It is a video of just over two minutes, with an electronic melody in the background. A golden trophy appears in the clip that rotates to display various interesting symbols. Two outstretched hands can be seen next to an hourglass-like shape or two connected diamonds. Also seen is a rocket ship, gold coins (cryptocurrencies?) and dog figures — most likely a reference to his beloved Dogecoin. It also shows a sphere that could well be the moon, a planet or an asteroid, along with what looks like solar panels with the letters ‘NFT’ .

In addition, the statuette displays the words “Vanity Trophy,” “HODL” (an acronym for those who hold cryptocurrencies), and “Computers never sleep,” which sometimes changes to “Never sell.”

With a very techno beat, a female voice is heard repeating phrases like, “NFT, for your vanity. Computers never sleep. It is verified. It is guaranteed.”  Of course, it is speculated that Musk enlisted the help of his partner, Canadian singer Grimes, to create the song.

I’m selling this song about NFTs as an NFT pic.twitter.com/B4EZLlesPx

Although Elon Musk’s tweet does not contain any sale links, the Valuables page has recorded 17 purchase offers so far. They start at $3 dollar and top at $1,121,000 (about 23 million Mexican pesos). The highest bid was made by Sina Estavi, the CEO of the Bridge Oracle platform who curiously also put the maximum offer for Jack Dorsey’s first tweet and offered $2.5 million.

According to the platform, the tweet itself “will continue to live on Twitter,”  but the final buyer will have the NFT “signed and verified by the creator” —  in this case, Elon Musk himself. 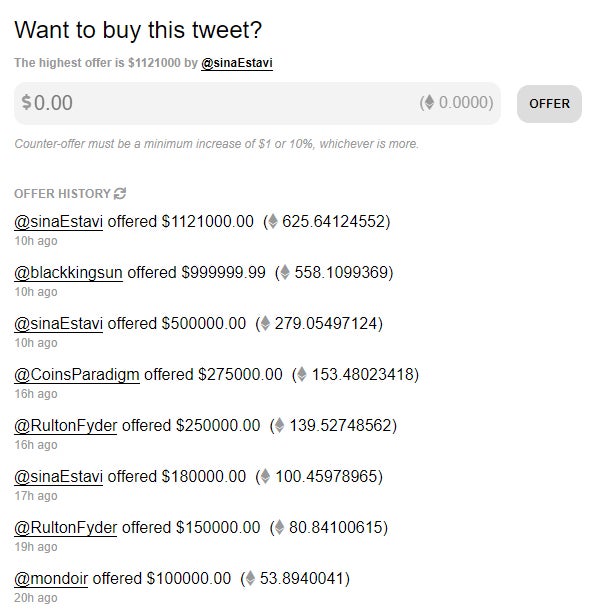 It is not the first time that the CEO of SpaceX dabbled in music. In early 2020, he released an electronic music song titled “Don’t Doubt ur Vibe.” While neither is exactly a musical gem, both have collectible value just by existing and being the product of Elon Musk’s ingenuity.

Taking advantage of Musk’s occurrence, digital artist Beeple shared an illustration that he dubbed “Non-fugible Elons.” It is a composition where the tycoon appears mounted on a Shiba Inu dog (symbol of the Dogecoin) while holding a trophy with the initials “NFE.”

– HODL: It is a colloquial form used in the world of cryptocurrencies (especially among the Bitcoin community) to refer to those who accumulate digital currencies, trusting that they will increase in value. It originated from a typo when someone wrote “hodl” instead of “hold.”

– NFT or Non-fungible Token: It is a special type of crypto token that represents unique digital assets, such as images, video clips, or in this case, tweets. NFTs can be sold and bought, but they are not mutually interchangeable like cryptocurrencies and many other utility or network tokens that are fungible in nature.