For a real challenge of your teamwork, Tactical Ops brings it in spades. These multi-tiered missions consist of five parts culminating in a large-scale boss encounter. The one we played is called Leader of the Pack, and centers on stopping Albion from creating deadly new breeds of drones.

Tactical Ops can be brutal, mainly because failure means restarting the entire thing from the beginning. But I loved how it promotes constant communication and teamwork. The first mission tasked us with visiting separate areas to activate a panel simultaneously. Splitting into two pairs, we arrived at our post but realized that activating a panel before the other team triggered waves of enemies for both sides. Thus, the goal was to try and communicate when both sides were ready to go so that we could face enemies prepared and not accidentally surprise the other crew before they’re ready. 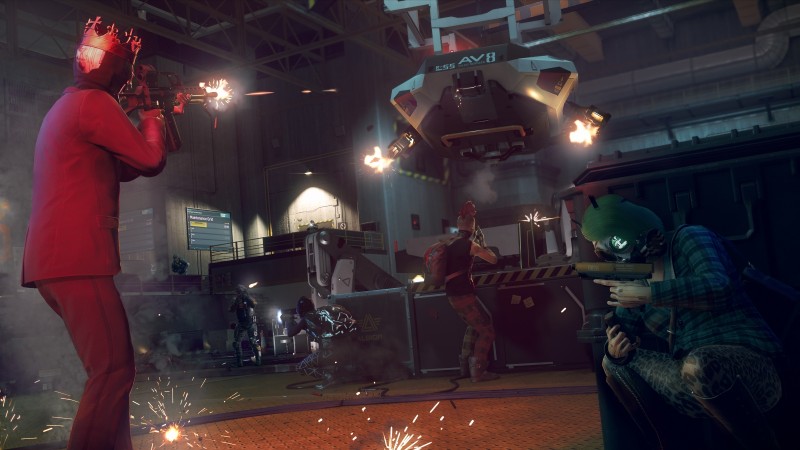 Another tier was something strange and different. After a series a drone bombings, London’s streets were empty and fog-filled; it felt like something out of a horror game. All that remained were Albion’s new breed of near-invincible drones patrolling the street, and our task was to gather intel on them by scanning the drones themselves, then later dropping their defenses to destroy them. Since these powerful drones can tear players apart in seconds, this became a tense yet hilarious game of hide-and-seek as our team devised haphazard strategies for scanning them without getting spotted.

We eventually decided to huddle atop a cargo drone and scan them from a safe distance above. As we kept watch and relayed when to raise and lower our platform, things went sideways when I slipped off like a dope and alerted two super drones. Panicked, we fled inside of a nearby bar. Though we were safe, the two drones smartly hovered in front of the entrances. Trapped, we realized we could scan from inside and peeked out the door to take potshots when their shields dropped. Scrambling in and out of our safe zone while giggling like kids playing hide-and-seek was a blast, andeEmergent stories like this are where Watch Dogs: Legion’s online really shines.

The final task was a bit less exciting since it’s a remixed version of the campaign’s final boss fight. Like the campaign, defeating the boss involves dropping its defenses before dealing damage to exposed parts. In a cool twist, one player must concentrate on using four terminals to guide a tiny drone through a series of tunnels to destroy vulnerabilities that drop the bosses shields. Meanwhile, the remaining three players have to fend off waves of foes to protect the player jacked in the computer. It’s incredibly difficult, especially since you only get four attempts. If you can’t finish the boss after completing each terminal, you lose automatically. It’s a harsh fight that depends on players having a strong loadout going in, but I enjoyed the teamwork aspect of it. Tactical Ops were my favorite aspect of Watch Dogs: Legion Online, and I look forward to seeing more of them in the future.