Lenovo today announced that the Legion 2 Pro arriving on April 8 will pack a 5,500 mAh battery, which is 500 mAh larger than what its predecessor Legion Pro ships with.

The company also revealed that the Legion 2 Pro’s battery will support 90W charging, but it’s yet to confirm if the implementation will be similar to what we’ve seen on the Legion Pro, which features two USB-C ports supporting up to 45W speeds, taking the total to 90W. 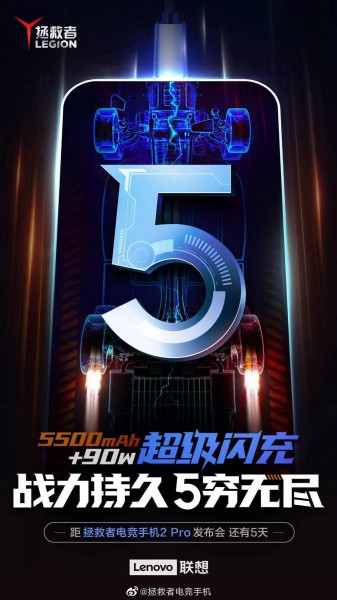 Lenovo is yet to detail the Legion 2 Pro’s specs sheet, although the company has already confirmed that the gaming smartphone will come with a dual-turbo cooling system, Snapdragon 888 chip, and a 6.92″ 144Hz FullHD+ AMOLED screen.

Geekbench revealed the Legion 2 Pro will run Android 11 out of the box and have 16GB RAM onboard. This particular model, according to the Master Lu benchmark, will come with 512GB storage. It also tells us the smartphone will have two more memory configurations – 12GB/128GB and 12GB/256GB.

Lenovo has promised to release a teaser each day leading to the April 8 event, so we’ll definitely learn more about the smartphone before its official unveiling.