Deep Silver and 4A Games just announced a Metro Exodus PC Enhanced Edition alongside an update on PlayStation 5 and Xbox Series X upgrades on the horizon.

Full ray tracing is on the horizon with the revamped versions of the games. As noted in the reveal, Metro Exodus was one of the first major titles to utilize ray tracing but it was only accessible for high-end PCs with the help of NVIDIA’s latest RTX graphic card series. With the Xbox Series X/S and the PlayStation 5 both offering ray tracing support, the studio is making “radical” changes to revamp what ray tracing means and bringing it over to console.

“We have built an all-new fully ray-traced lighting pipeline that brings a number of optimizations, upgrades, and new features to the ray-traced global illumination and emissive lighting that we pioneered with the original release of Metro Exodus, as well as an upgraded implementation of our powerful temporal reconstruction technology to further boost resolution, visual detail, and performance,” says Deep Silver about the latest update.

This update will provide the “ultimate” version for PC players, pushing past expectations with the vanilla ray tracing experience. So what does this mean for console players? According to the studio, “Metro Exodus will run at 4K / 60FPS with full Ray Traced lighting throughout on PlayStation 5 and Xbox Series X. The base game and DLC expansions will feature both our ground-breaking ray-traced global illumination (RTGI) and the ray-traced emissive lighting techniques pioneered in The Two Colonels expansion across all content.” 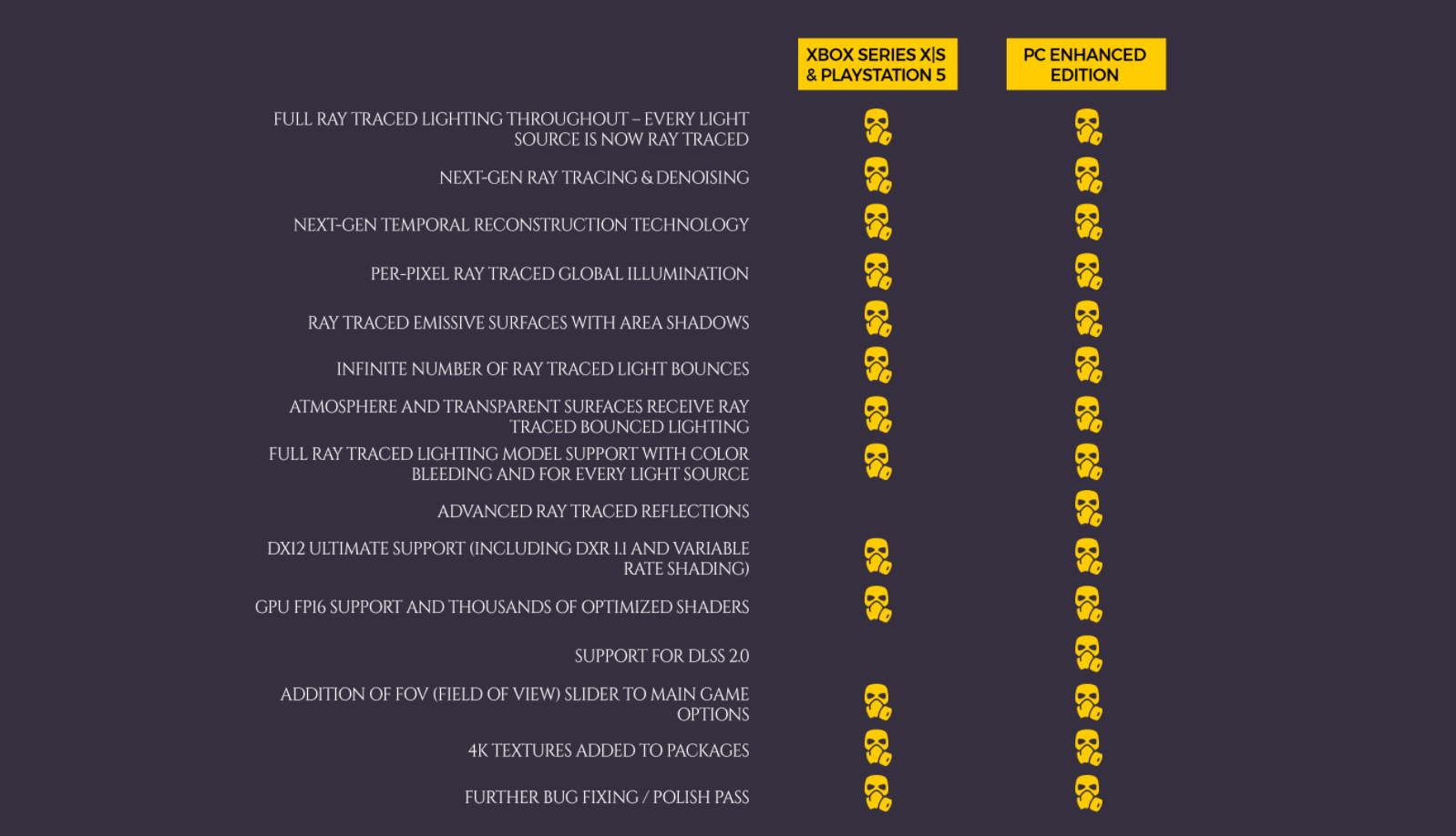 Players can also look forward to reduced loading times due to both consoles offering optimized SSD storage, in addition to platform-specific tweaks including spatial audio and improved latency on Xbox and haptic feature utilization for the PlayStation 5 experience. For Xbox Series S players, the team is aiming for 1080p, but the rest of the revealed improvements are confirmed at this time alongside 60 FPS and ray traced lighting.

Quality of life and other more standard tweaks will also be arriving for all versions, including the additional option to alter the FOV (which is a first for the series).

As for PC-specific changes, the new fully ray-traced lighting pipeline and the latest GPU-capable hardware from NVIDIA and AMD will be utilized for the Enhanced Edition. In fact, Deep Silver says that the Enchanced upgrade will be so “extensive” that it will require a ray tracing-capable GPU as the bare minimum spec and that this version will be delivered as a separate product.

“Applying the same philosophy as our Xbox and PlayStation upgrades, this PC Enhanced Edition will be free to all existing Metro Exodus owners on the Epic Games Store, Steam, and GoG. You can expect the PC Enhanced Edition to release later this spring.”

Are you excited for the Metro Exodus improvements or all you all wrapped up with your time in-game? Sound off in the comment section below!